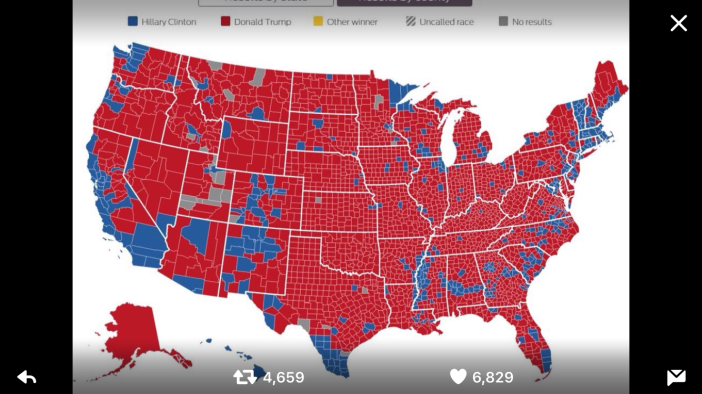 “It’s midnight in America. The day before fifty million Americans got up and stood in front of the great iron wheel that had been grinding them down. They stood there even though the media told them it was useless. They took their stand even while all the chattering classes laughed and taunted them.

They fought and they won.”

And for your Democrat friends, send them the following link. It’s from a Libertarian who voted Bernie in the primary and 3rd party in the general (yes, we have entered the age where a Libertarian will vote for an avowed Socialist if he gets to keep his faux libertine “freedoms”):

“Did you read Wikileaks? Well, you should have. The “conspiracies” were true, and the mainstream media lied to you to about everything. Wikileaks has a 10-year record of never releasing a single falsified document, and is not connected to Russia. Everything they released were the actual e-mails of Hillary Clinton and her campaign staff. You had the opportunity to look through a window into the Hillary Clinton campaign, but you didn’t. By ignoring the leaks, you ignored reality.

By not listening to your fellow Americans, and accusing them of being “conspiracy theorists” and trusting the corporate media, you ignored reality. By only following other liberals on social media, and only reading liberal or corporate news, once again ignoring reality. When Hillary Clinton was caught rigging the primary against Bernie Sanders, and Democrats nominated her anyway they ignored reality.

I took it upon myself to understand Trump, and his supporters. What I found was millions of great Americans who had been disenfranchised, normal people like you and I, who did not recover from the Great Recession. They’re pissed off about Obama Care, endless wars, trade deals that have killed jobs, higher taxes, a rigged economy–and, they are not wrong.”

The rest is HERE.

Enjoy the Trump Train one more day, folks. Tomorrow, I’m afraid I need to bring the full weight of the Truth Train down on this party. The imminent persecution may have been delayed, praise be to God, but it’s still coming.