WARNING: THIS POST CONTAINS EXAMPLES OF SATANIC PRAYERS AND BLASPHEMIES. ARM YOURSELF.

Let us pray. Saint Michael the Archangel, defend us in battle, be our protection against the wickedness and snares of the devil. May God rebuke him we humbly pray; and do thou, O Prince of the Heavenly host, by the power of God, thrust into hell Satan and all evil spirits who wander through the world seeking the ruin of souls. Amen.

You may remember a week or so before the 2016 election, there was a wiki dump of Podesta emails wherein the Pizzagate story broke, and it was also revealed that a cadre of ‘cultural elite’ were involved with Marina Abramovic in Spirit Cooking — satanic rituals involving, well read about it HERE.  Now it was not at all surprising to find this out, and in fact, a lot of other pieces fall neatly into place when you think about it. I also surmised at the time that the scope of demonic activities, and the number of people involved, was likely far greater that what we knew from wikileaks. There was a new development last week when a C-List Hollywood actress, with a picture of  Marina Abramovic featured prominently on her Facebook page, was arrested and charged with sex trafficking as part of having a leadership role in a cult. You can be sure that for every one of these stories that breaks, there are dozens more we don’t know about.

While evidence for the spread of the demonic continues to grow, I have to admit being caught off guard by what I’m about to share. Even with the sense of the demonic being absolutely palpable in the course of the last few years — a sense that is shared by many good priests – I still wasn’t mentally prepared for what I found.

The story begins with naive old me casually checking out the summer music scene. I like outdoor concerts/fairs, and my current place is not hospitable to such in the summer. So I look to the coasts and try to build in some vacation time.

Disclaimer: Rock music certainly carries a well-deserved reputation for dragging incremental sinfulness, especially licentiousness and drug use, into the mainstream. This was true from its earliest roots, and exploded during the 60s and 70s. But the mainstreaming of the demonic itself has never been on full display like what I’m about to show you. This is way beyond “Sympathy for the Devil” or “Runnin’ with the Devil” or even “Highway to Hell”, although I realize it’s all part of a greater whole. A lot of people reading this are judging me right now, not without cause, but I grew up in the 70s and 80s and my ear just can’t unhear it. So try to set that “issue” aside for a moment, and examine the following data set for what it’s worth. There is great value in understanding exactly what we’re up against.

I clicked on the annual music fair called “MMRBQ”, held the weekend before Memorial Day in my native place HERE. The way it works on the poster below, the headliner is listed first, who will be the last to play at the show, and then the bands are listed in order of descending popularity. The last band listed will be the first to play.

I didn’t recognize the second band on the poster. Never heard of them. The first and third bands are very famous, so the second band must also be very famous and very popular. I sighed, having finally reached the age where the second most popular band at a very popular event was utterly unknown to me. They must be relatively new and got popular very quickly with their first record or two. They slipped in under my radar.

I wanted to get to know them.

And google served up this.

Full on Satanists. Not just playing dress up. How do we know? Well first of all, speaking of dressing up, of course real Satanists are going to have the very best dress/vestments, and boy do they ever. Note the Roman cassocks, the pectoral inverted crosses, the watered silk chasuble, and that MITER.

Taking it up a notch, here we add the pellegrina to the cassock. I’m not sure the meaning of the green inside the chasuble vs the violet in the first pic. Satanists tend to invert everything, so surely liturgical time would be bent somehow.

They are from Sweden and they are famous all over the world. Mainstream. 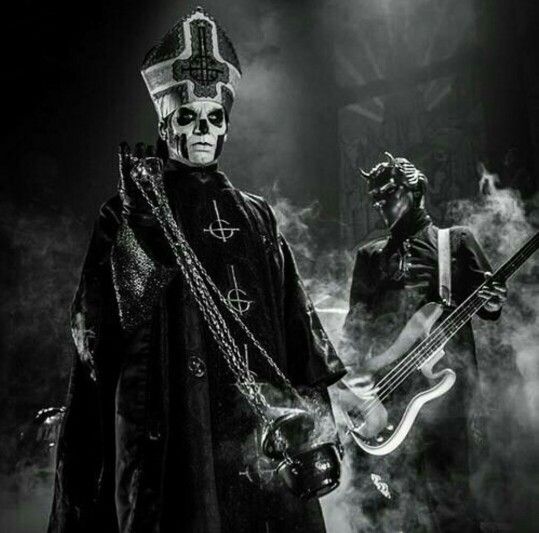 Which reminds me, if you like incense, the Monks of the Holy Rood Guild make the best HERE. Cantica is my favorite, but the Laudate is pretty good too, and it lingers longer.

What else do we know about real Satanists? They know the One True Faith. They learn it better than most of the faithful, and then they invert it. Like the Nicene Creed. Ready for some lyrics?

How about Black Masses and an inverted Pater Noster?

Tonight we summoned for His unholy fiend
Now celebrate
The End

How about acknowledging and then mocking the Real Presence?

How about the prophesy of the Antichrist born of a lustful nun?

Prime mover
Maternal slave
With child of her grave

Mother
Filth in her womb
Father
Waiting in tomb

Prime mover
Maternal slave
With child of her grave

“Death Knell”
Say, can you see the cross?
Inverted solemnly
A symbol for the goat
Of a thousand young

Say, can you hear the chimes?
Tolls now for the end
Bells call out our doom
As victor reaches womb

Sex, sex, sex
Receive the beast of evil
Of evil…

Can you say his name?
Carrier of the light
Legions of his seed
A child you a spouse will feed

What else do we know about real Satanists? They know Latin. Did you know that there is no “Novus Ordo” of the Black Mass? That’s right, every Black Mass said today is according to the old rite, diabolically inverted and perverted. Conversely, I’ve heard it said that the devil hates Latin. But man, these cats sure seem downright proficient.

Perverted
Are your wishes and dreams
Tanning in Lucifer’s beams

Oh Satan
Devour us all
Hear our desperate call

Keep in mind, I’m not even posting the really sick stuff. Most of their songs are all about recruiting souls. It’s awful. My whole point for you to take away is the title of this post: This is not underground, this is not on the fringe, this is not niche, this is now TOTALLY MAINSTREAM. There are armies and armies of people who chant these lyrics. Is there any wonder the sense of the demonic is palpable? This is what we’re up against. Arm yourself with the armor of God. Say your Rosary every day. Set aside time devoted to prayer. While you’re at it, read up on why the collapse of (and now the suppression of) the contemplative orders, how this directly effects every one of us, and makes our jobs that much harder HERE.

I saved the best part for last. This band was formed in 2010, by the front man in the bishop’s miter. 2010 was fully three years before the faux abdication of Pope Benedict. Can you guess the stage name of the front man?

I kid you not.

So it turns out that title was invented by Satanists. Make of that what you will.

11 thoughts on “Well this explains a lot: It turns out that Satanism has gone totally mainstream (with pics)”