Today is 14 September, the Exultation of the Holy Cross. It’s been one of my favorites for as long as I can remember.

Emptying of self and embracing the Holy Cross are the keys that unlock the Porta Fidei. You will get nowhere without these things. Uniting your cross, your sufferings, to the Holy Cross; this is how you grow. Suffering is a tool. It’s not merely allowed by God, in many cases it is PROVIDED by God, for your benefit. Embrace it – at first with patience, then submission, and finally with joy (that’s what ‘exultation’ means).

I will be writing more about this, but for now I offer this reflection:

As happens occasionally but not often, Good Friday fell on March 25 this year, the Feast of the Annunciation.  In the Catholic Church, at least the Latin Rite, the Annunciation is transferred to today, April 4th, the first day after the Easter Octave. But despite the transfer, the fact remains that they actually occurred on the same day this year.

Much has been written on this occasional convergence.  We are concerned here with the central theme that runs through the events of these two days, and it is THE concept that is the keystone of true conversion: Emptying of self. 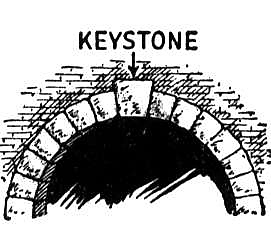 You could say that emptying of self is the pathway, or the doorway, or even the ladder of true conversion, and you wouldn’t be wrong.  But keystone is more accurate, because emptying of self isn’t just what gets you there, it is what keeps you there. It’s the thing that holds everything else in place.  The stone that the builders rejected, which has become the Cornerstone, desires that we embrace the keystone.

Let’s break down the events of the day.  God provides models in Our Lord and Our Lady.

The Annunciation and Mary’s fiat:  The angel announces what is about to go down.  How often, as I contemplate this mystery, I try to get inside Mary’s head.  This angel just delivered the single biggest mind blowing message of all time.  And it wasn’t over; a response was required, because God imposes His will on no one.  Scripture reveals her response was immediate, and it was a complete emptying of self. “Be it done unto me.”  Complete trust in the Lord.  No qualifying questions back to the angel before she said yes.  Just total self-denial and acceptance of God’s will.  Has there been a better example of Prudence and Courage in all of human history?  How far we would advance if we could each practice these virtues just a little bit every day.  God, being God, could have chosen to redeem the world in any way He pleased.  But because His love for us is so intense, He chose the way that would best help us understand and obey.

The Incarnation:  Now it’s God’s turn.  The Incarnation is the literal outpouring of God Himself into our humanity.  In this instant, He became one of us in all ways except sin, by emptying Himself in a way that we can scarcely contemplate. His Divine Nature was united to His (our) human nature in a way that was real and substantial, yet not commingled, with each retaining its own properties HERE. This is the John 3:16 moment.   If Mary’s fiat was a demonstration of Prudence and Courage for the ages, Christ’s Incarnation is the model of Humility par excellence. Anything less would not have been good enough for our sake, so what excuse have we?

The Agony: Fast forward 33 years. We arrive at the Garden, where Christ’s anguish is NOT METAPHORICALLY demonstrated in His sweating blood.  Bursting capillaries caused by human stress.  And no, our Lord was not a coward in any way. “Let this cup pass” was not some cowardly request from a fraidy cat Jesus who suddenly changed His mind about the whole deal.  While it is possible He did experience fear of physical pain, in so much as He was fully human, and fear of physical pain is a natural human emotion, He was not trying to “get out of it”.  He was, at this moment, contemplating what was to come, while at the same time bearing the weight of every sin ever committed and ever to be committed. Not only that, but it seems likely that Jesus in this moment was contemplating in a particular way the souls of the damned.  Here he was about to undergo this tortuous death, and yet a multitude of beloved souls through the ages would choose to ignore it.  That had to hurt, don’t you think? HERE“Yet not my will, but thine be done” is a complete emptying of Jesus’ human nature in subservience to His Divine Nature and God the Father.

The Way of the Cross:  From the anguish of the Garden, we pass to the relative serenity of the Via. Not that it was a serene scene; it was brutal every step of the way.  Rather, I’m referring here to Christ’s demeanor, His bearing. It was one of relative serenity compared with the Garden and the contrast is worthy of reflection. Isn’t it likely that His focus here shifted from that of the damned to those beloved souls He was about to save?  Here he becomes the Lamb, His total submission was in His emptying.  Emptying at the beating, at the trials, at the pillar, at the crowning, at the stripping, at the mocking, at the carrying, at the falling, and at the nailing.  If you can watch Mel Gibson’s The Passion of the Christ, I don’t care if you’re watching it for the tenth time, and I don’t care what kind of bad ass you think you are, I don’t care if you are Marine Infantry EOD… if you can watch that movie without sobbing like a four year old girl, you have not sufficiently emptied yourself.

The Crucifixion:  For this He was born, for this He came into the world.  The Annunciation, Incarnation, Passion and Death of Jesus Christ are all tied together on His lips. Nearly dead at this point, Jesus is hoisted aloft.  If you’ve never read a physical account of the Crucifixion, you need to HERE  As the tree was the instrument of our fall, so it is the instrument of our redemption, with the complete emptying of Jesus upon it.  A spiritual emptying of the God-man, and the physical emptying as well. “I am poured out like water, and all my bones are out of joint; my heart is like wax; it is melted in the midst of my bowels.”

I repeat: God, being God, could have chosen to redeem the world in any way He pleased. But because His love for us is so intense, He chose the way that would best help us understand and obey.

True conversion can only begin when you take the decision to empty yourself.  It cannot be conditional.  It must be total submission.  That’s when God will begin His work in you.  And it’s the most liberating thing you will ever experience, like chains being thrown off.

It’s not just a path, a door, or a ladder.  It is the keystone you must work to perfect everyday.