“O God, who hast constituted the services of Angels and of men in a wonderful order, mercifully grant, that they who ever stand before Thy face to do Thee service in heaven, may also defend our life on earth.” Collect, Feast of St. Michael

“Bless the Lord all ye His Angels: you that are mighty in strength, that do His will. O my soul, bless thou the Lord: and all that is within me praise His holy name. Alleluia, alleluia. Holy Archangel Michael, defend us in battle; that we may not perish in the dreadful judgment. Alleluia.” Gradual, Feast of St. Michael (Ps. 102, 20, 1)

Anyone reading this blog is surely quite familiar with the Prayer to Saint Michael the Archangel. It’s said after the Rosary and after Low Mass, as instituted by Pope Leo XIII, who composed it after having a dark vision regarding the future of the Church.  What many don’t know is that the prayer we use is a drastically shortened version of the original. And boy, the original is simply terrifying. But it’s also a WMD in the realm of Spiritual Warfare, so we need to learn about it.

There are varying traditions regarding the circumstances and even the year in which Leo had his vision and then transcribed this prayer. However, there are several elements that seem to be common to all of the accounts I’ve read. Shortly after saying Mass one day, Leo became entranced. Some reports have him falling to the ground and appearing dead, others have him standing upright as if dead on his feet, ashen-faced.  When he regained his faculties, he reported “Oh, what a horrible picture I have been permitted to see!” What he saw was Satan with a multitude of evil spirits charging forth from Hell, engaged in an epic battle in an attempt to destroy the Church. Then Saint Michael intervenes to consign Satan and his minions to the depths of Hell, just as he did at the time of the original non serviam (Rev 12 HERE).

The political/social/economic climate of the 1880s is an important backdrop to all of this. The profound  errors and evils of the Endarkenment were freely mixing with the profound  errors and evils of Marxism. The industrial revolution and its fledgling Capitalism were not without their own abuses. Rome had been conquered militarily and the Papal States lost, bringing a deep concern over the temporal sovereignty of the Pope and its effect on his ability exercise his spiritual authority.

As an aside, you really should dive into all the great writing of Pope Leo XIII. Start with just a few paragraphs of Rerum Novarum HERE.  When something written 125 years ago so clearly applies to our times, and seems like it could have been written yesterday, you know you’ve got something good.  A lot of his stuff is that way, and if you are remotely aware of current events in the Vatican, the prayer you’re about to read is going to seem rather on-target.

So what was so horrible in Pope Leo’s vision?  Well, it wasn’t the ending, because the ending would have been a great relief. Yet it wasn’t a sense of victory that Leo came away with. Why?  Because the first part of the vision – in which he saw how Satan would come to attack the Church – must have been truly horrifying. Pope Leo had been around the block a time or two at this point.  He would not have been easily shocked. Keep this thought in mind as you read the long version of the prayer.

Lastly, a word of caution. This is truly a weapon of Spiritual Warfare, which is a very real thing. It’s more real than the room you’re sitting in and the chair you’re sitting on.  Get that through your head. It’s not something to be messed around with. In this prayer, which is used in exorcisms, you are (indirectly) engaging with creatures whose intellects are orders of magnitude greater than your own. Make the Sign of the Cross before and afterward and adopt a military bearing.

“O Glorious Prince of the heavenly host, St. Michael the Archangel, defend us in the battle and in the terrible warfare that we are waging against the principalities and powers, against the rulers of this world of darkness, against the evil spirits. Come to the aid of man, whom Almighty God created immortal, made in His own image and likeness, and redeemed at a great price from the tyranny of Satan.

“Fight this day the battle of the Lord, together with the holy angels, as already thou hast fought the leader of the proud angels, Lucifer, and his apostate host, who were powerless to resist thee, nor was there place for them any longer in Heaven. That cruel, ancient serpent, who is called the devil or Satan who seduces the whole world, was cast into the abyss with his angels. Behold, this primeval enemy and slayer of men has taken courage. Transformed into an angel of light, he wanders about with all the multitude of wicked spirits, invading the earth in order to blot out the name of God and of His Christ, to seize upon, slay and cast into eternal perdition souls destined for the crown of eternal glory.

“This wicked dragon pours out, as a most impure flood, the venom of his malice on men of depraved mind and corrupt heart, the spirit of lying, of impiety, of blasphemy, and the pestilent breath of impurity, and of every vice and iniquity. These most crafty enemies have filled and inebriated with gall and bitterness the Church, the spouse of the immaculate Lamb, and have laid impious hands on her most sacred possessions. In the Holy Place itself, where the See of Holy Peter and the Chair of Truth has been set up as the light of the world, they have raised the throne of their abominable impiety, with the iniquitous design that when the Pastor has been struck, the sheep may be.

“Arise then, O invincible Prince, bring help against the attacks of the lost spirits to the people of God, and give them the victory. They venerate thee as their protector and patron; in thee holy Church glories as her defense against the malicious power of hell; to thee has God entrusted the souls of men to be established in heavenly beatitude. Oh, pray to the God of peace that He may put Satan under our feet, so far conquered that he may no longer be able to hold men in captivity and harm the Church. Offer our prayers in the sight of the Most High, so that they may quickly find mercy in the sight of the Lord; and vanquishing the dragon, the ancient serpent, who is the devil and Satan, do thou again make him captive in the abyss, that he may no longer seduce the nations. Amen.” 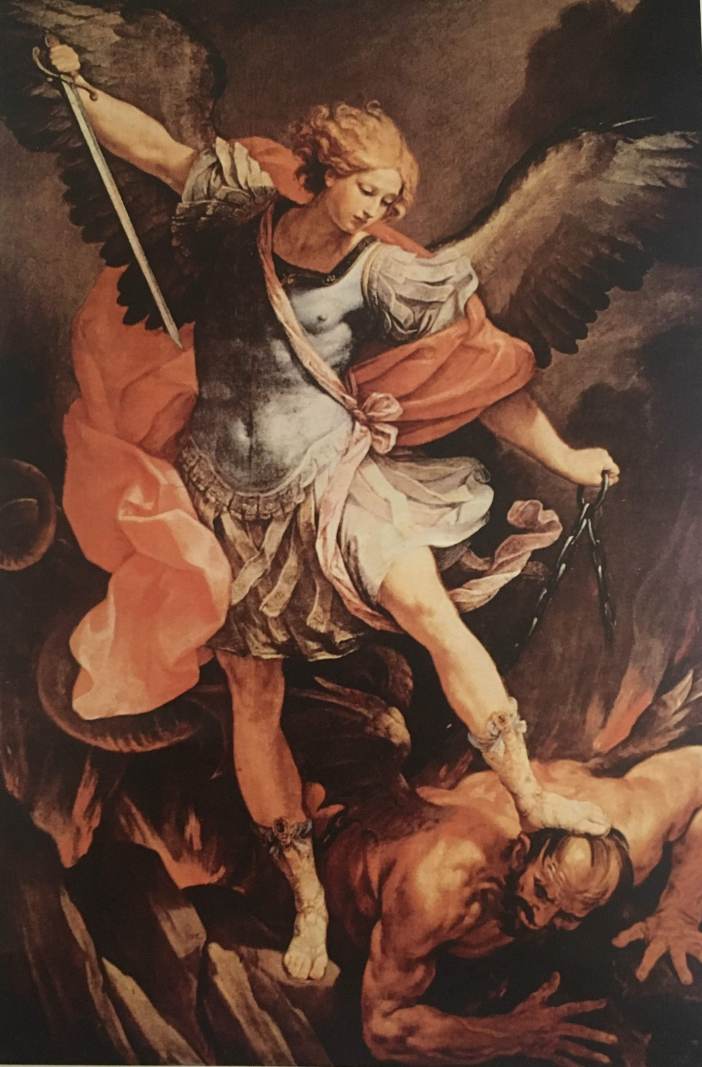