“Whoever has had, as I have happened several times, the luck of meeting him and speaking to him with the utmost cultural confidence, knows that Pope Francis (sic) conceives Christ as Jesus of Nazareth, man, not God incarnate. Once incarnated, Jesus ceases to be a God and becomes a man until his death on the cross. The proof that confirms this reality and creates a Church that is completely different from the others is proved by some episodes which deserve to be remembered. The first is what happens in the Garden of Gethsemane where Jesus goes after the Last Supper. The apostles who are a few meters from him hear him pray to God with words that were at one time reported by Simon Peter: “Lord – said Jesus – if you can remove this bitter chalice from me, please do it, but if you can’t or you don’t want me to drink it all the way ». He was arrested by Pontius Pilate’s guards just outside of that garden.

Another episode, also well known, occurs when Jesus is already crucified and once again repeats himself and is listened to by the apostles and by the women who are kneeling at the foot of the cross: «Lord, you have abandoned me».
When I happened to discuss these sentences, Pope Francis (sic) told me: “They are the demonstrable proof that Jesus of Nazareth, once he became a man, might have been a man of exceptional virtues, but he was not a God at all”.” HERE

The thing that really caught my attention about all this, besides the not-so-surprising part about an antipope being an arch-heretic, was Scalfari’s first sentence. Did you miss that? Let me clean it up for you:

“Whoever has had the luck of…speaking to him…knows that Pope Francis (sic) conceives Christ as Jesus of Nazareth, man, not God incarnate.”

Got that? Antipope Bergoglio denies the divinity of Jesus Christ, and everyone knows it. This claim is what makes Scalfari’s account so credible. In fact it almost seems like an attempt to diffuse the bombshell. “Hey, what I’m about to say sounds like breaking news, but guess what… everybody already knows!”

Not that you really even need to ask him about it. 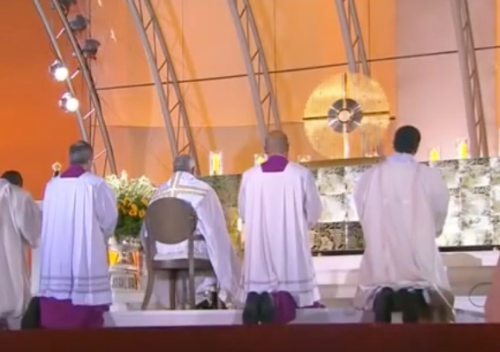 27 thoughts on “The worst kept secret is finally out!”