It’s now to the point where one doesn’t have to pick and choose what to write about, nor even need to write anything at all. Just cut and paste tweets and official news reports from the usurped Vatican, and watch the VISIBILITY of it all grow each day.

The material below is all from the past 48 hours.

Twitter is tagging this video as "sensible material", to make it impossible to it to spread.

This took place INSIDE OF A VATICAN CHURCH, in front of the Tabernacle! pic.twitter.com/UCraOMnOdi

Pope Francis on Friday inaugurated the “Anima Mundi” Ethnological Museum and the Amazonia Exhibition at the Vatican Museums. By Robin Gomes HERE

“Beauty unites us. It invites us to live human brotherhood,  countering the culture of resentment, racism and nationalism which is always lurking.”  Pope Francis made the point Friday evening while inaugurating the “Anima Mundi” Ethnological Museum and the Amazonia Exhibition at the Vatican Museums.
“May this Ethnological Museum preserve its specific identity over time and remind everyone of the value of harmony and peace between peoples and nations,” he wished, hoping that its art collection will “make the voice of God resound in those who visit this collection”.
The inauguration of the museum and the exhibition were timed for the October 6-27 Synod for the Pan-Amazon Region, currently taking place in the Vatican.

The concept of the world soul is universal. Anima Mundi extends cross religions, cross times, across cultures and gender. She has a feminine feel, but in essence she is androgynous – on the landscape of creation she stands before the separation into divine feminine and masculine, anima and animus. She is whole. She connects heights and depths, the spirit and the flesh. She is a hidden reservoir of the planet’s past and future, which contains images, memories, mythologies – collective wisdom of all.

As desire for life, love and inspiration, she is diffused throughout all nature, including every cell in your body and every atom in the universe. HERE

With a Prologue written by the Ecumenical Patriarch of Constantinople, Bartholomew I, the work is a compilation of the addresses, messages and homilies in which Pope Francis refers to the defense of the environment and appeals for the promotion of a worthy life for all peoples.

Among all the included documents, is an unpublished text of the Holy Father, in which he requests that we ask forgiveness for all the harm caused to our planet.

Although the book won’t be published until next Thursday, the 24th, the Italian newspaper Corriere della Sera has published extracts of the Pontiff’s book reproduced by the Vatican Publishing House.

In one of the extracts, the Holy Father says that without people’s true repentance about their lifestyle, the fight for the protection of the environment will be futile. “I sincerely hope for growth in awareness and true repentance on the part of us all, men and women of the 21st century, believers or not, and on the part of our societies, for allowing ourselves to be carried away by logics that divide, create hunger, isolate and condemn. It would be good to ask the poor <and> the excluded for forgiveness. Then we could repent sincerely, including for the harm done to the earth, the sea, the air, the animals . . . “ 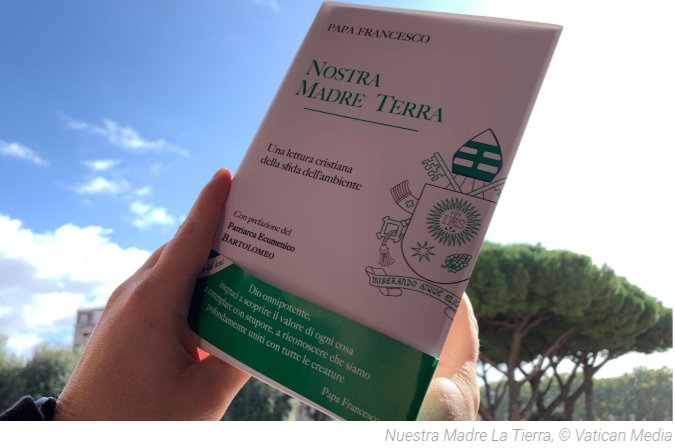 Note well that the “priestess” is holding a bishop in white, wearing an inverted cross.

If you don’t know by heart the Confession times of your three closest churches, then you don’t understand the seriousness of the situation.  Start preparing yourself for how much worse this is going to get. Think about yourself and your family.

Every wretched thing is now hatching out of the Roman sewer. We are talking about real demons here, and it seems more likely every day that this really might be the run up to the Big Show. Get confessed, stay confessed, daily Mass, daily Rosary, prayer to Our Lady Undoer of Knots, and as many litanies as you can muster.

Sacred Heart of Jesus, have mercy on us. Blessed Mary, Virgin Most Powerful, pray for us. Saint Joseph, terror of demons, pray for us.

25 thoughts on “Liveblogging the apostasy is now as easy as 1-2-3: Pics and vids, no words needed!”