Today is the 45th anniversary of the Canonization of Saint John Neumann. He was the fourth Bishop of Philadelphia, from 1852 until his death in 1860. He is most known for the establishment of Catholic schools, at a time when Catholics were under attack, even including physical violence. History repeats.

Anyway, I searched the website of the Archdiocese, and couldn’t find one word about this anniversary, so I am doing some cut and paste. Enjoy.

Saint John Neumann, pray for us.

Following is from a Supplement to the Philadelphia Inquirer, July 25, 1976.

At the age of 48, Bishop John Nepomucene Neumann passed away on January 5, 1860 from a heart attack. In his short time as bishop of Philadelphia, Neumann built 89 churches, set up the modern Catholic school system, introduced the Forty Hours Devotion, and founded the Third Order of Saint Francis of Glen Riddle.[1] It was not long after his death that calls were being made to open his cause for canonization. In May of 1886, the Diocese of Philadelphia and the Congregation of the Most Holy Redeemer (Redemptorists) held its first session to examine the life of John Neumann for evidence of his virtue.[2]

As the examination of Neumann’s life began, investigations into possible miracles were also underway. While one miracle for beatification and one for canonization are the current requirements, at the time of Neumann’s cause, two miracles were required for the beatification process.[3] Although many cases of miracles were reported, two were selected and submitted to the Vatican in 1924 in hopes of beatification happening by the Holy Year in 1925. However, the process stalled because one of the miracles did not have sufficient evidence.[4] 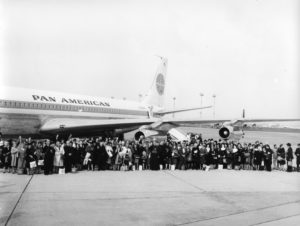 In 1957, 170 American bishops signed a letter to Pope Pius XIII requesting an Apostolic Benediction for Neumann.[5] However, in a 1958 letter to Cardinal O’Hara c.s.c., Father Edward Heston, Procurator General of the Congregation of Holy Cross, wrote that a dispensation to move forward with only one miracle would not likely be granted. To get the second miracle, they would have to “prod the Servant of God [Neumann] into action, so as to get him to work a miracle.”[6] Unbeknownst to Heston and O’Hara, the second miracle had already been performed and was actually referenced in the letter. Kent Lenahan Jr. of Villanova, PA was critically injured in a car crash in 1949; however, there was longstanding debate if his unexpected full recovery was due to Neumann’s intervention or Lenahan’s “youthful constitution.”[7]

As doctors and theologians examined Lenahan’s case, the Archdiocese of Philadelphia and the Bishop Neumann Center continued with efforts to make more people aware of the cause of Neumann. In 1959, over 150 sermons were preached on his life at various parishes and nearly 6,000 people visited his tomb.[8] In addition, numerous prayer cards and pamphlets were distributed so that people would pray for Neumann’s intervention. Three years later, Neumann’s two miracles would be approved, that of Lenahan and a 1923 healing of an eleven year old in Italy named Eva Benassi. The beatification was originally scheduled for June 23, 1963; however, in May it was delayed because of the ill health of Pope John XXIII. The pope would pass away on June 3 and after the election of Pope Paul VI, the date was set for October 13th.[9]

With the path to sainthood more secured, Cardinal Krol called for the exhuming of Bishop Neumann’s body for the building of a shrine and obtaining relics. This was approved by the city in 1962 and involved doctors examining the remains and preservation work done on the body.[10] Around this same time, Neumann’s third miracle required for canonization was being performed on Michael Flanigan. Michael was a fourteen year old boy who suffered from Ewing sarcoma, a bone cancer in his legs, jaw, and lungs. Michael was cured of his illness after prayer and wearing of a relic, despite doctors testifying that based on the spread of the disease that Michael had a zero percent chance of survival.[11] After several years of investigating, Michael’s cure was found to be miraculous, giving Neumann the final miracle needed for sainthood. On December 20, 1976, Pope Paul VI approved the canonization of Neumann and on June 19, 1977 he was officially added to the legion of saints.[12] Cardinal Krol led a pilgrimage to Rome for the week long celebration and canonization of America’s first male saint.

Find all the material we have on Saint John Neumann on our digital catalog and visit the archives to go through the records.

6 thoughts on “Saint John Neumann: Defender of the faith, protector of youth, devoted to the Eucharist”