From the Patrick Coffin interview with Cardinal Burke a couple weeks ago, through the lens of a shrieking @DawnofMercy:

Coffin then repeats a traditionalist bishop's call for a synod to "resolve" whether the last conclave was valid. And he asks Burke about Antonio Socci's book claiming Benedict is still pope.

Surely Burke will assure listeners that Socci is wrong? Well, almost, but not quite… pic.twitter.com/7dEC43H3Wq

I’m only covering a five minute clip of this interview. If you want a crack at the complete transcript intertwined with Dawn’s pearl clutching, go HERE.

First of all, forget about St. Gallen Mafia and the shenanigans at the “conclave.” Coffin starts in about that around 18:00, referencing Bishop Gracida’s claims, but this will get us nowhere. Since Benedict attempted a partial abdication, which was wholly invalid and therefore a null act, no conclave actually took place. The conclave was rendered invalid ipso facto the invalid abdication.  It was a Cardinals’ Retreat, nothing more. Think about this. Any effort to invalidate a conclave that is already invalid would, if successful, only result in another invalid conclave, because the one true living pope is still alive and kicking. The failed partial abdication is the True Premise from which the resolution must proceed.

So start at the 23:00 mark. ++Burke is addressing the question of the validity of the abdication. The audio is pretty terrible, so here is the transcript and commentary from Dawn; sorry, but it’s the only source available. Ignore the sections that she highlighted, and concentrate on the second and third paragraphs.

Burke reluctantly admits that Socci’s claim that the papacy is split between two popes “won’t hold water.” But as for whether Benedict is still the pope, “the whole matter is a bit confused.” And Socci is “an outstanding, … saintly man,” Burke adds; “it merits to read him.” … 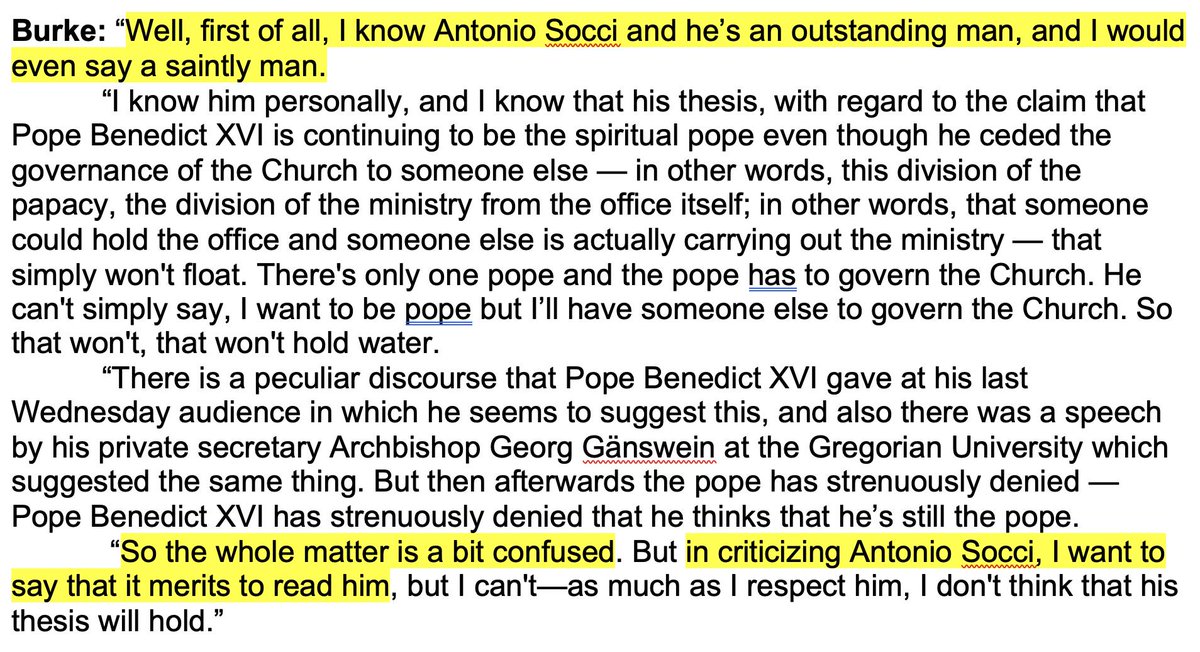 That’s enough to show Burke is too close to the schismatic rails. Given that @NCRegister, @cnalive, and @EWTN often run stories portraying him as a guardian of orthodoxy (though @cnalive wisely ignored his Declaration of Truths), they owe it to their readers to report on this …

Do you see what’s going on here? He mixes truth with error. Frankly, though, he is so close to the whole truth that he is looking straight past it.

First, ++Burke asserts that a pope must govern in order to be pope. “There is only one pope and the pope must govern the Church.” Well yes, that’s how it’s supposed to work, governance being one of the three components of the ministry, the others being teaching and sanctifying. However, failure to govern does not unpope a pope. A pope in a coma, a pope in exile, a pope in prison… none of them can govern, but they still remain pope. This is not a difficult concept. Yes, a pope is SUPPOSED to govern, but the failure/inability to govern has exactly ZERO effect on the ontological reality of who is pope. Popes remain pope until they die or validly resign. Period, full stop.

“That someone could hold the office and someone else is actually carrying out the ministry — that simply won’t float.”

THERE’S A TERM FOR IT: SUBSTANTIAL ERROR.

Pope Benedict’s faux partial abdication was based on delegating the governing aspect of the ministry, while retaining the office. This is Substantial Error, per Canon 188. Cardinal Burke correctly makes reference to the last Wednesday Audience and +Ganswein’s speech at the Gregorianum in 2016. There is also evidence in the original Latin Declaratio itself, where he fails to resign the Office. These actions nullified the abdication, per the very clear words of Canon 332.2, a canon which specifically addresses the conditions for a valid papal abdication. Therefore, the Cardinals had no jurisdiction nor authority to convoke a conclave, per Canon 359. You don’t need to be a canon lawyer to understand the plain meaning of the words of the law (a concept which itself is part of the law, as explained HERE).

What really is going on here is ++Burke falling headlong into the old False Base Premise trap. He first gets tripped up by the notion that whomever is governing must be pope, which frankly is just not very bright, in that it ignores the counterexamples I gave and the fact that we’ve obviously had antipopes who’ve governed the Church in the past. Then from the “Francis is pope” false assumption he proceeds to lay out the evidence that Benedict is pope, but he’s unable to apply said evidence back to the question of the effectiveness of the abdication.

Allow me to restate the block quote in the form of a rational argument, from ++Burke’s worldview, and you will see it more clearly:

Do you see how that works?  All of your assumptions throughout the argument (#2 through #5) can be true, but it will never lead you to a true conclusion if your base premise is false.

I need to write a letter.

…would you mind calling a press conference, and reclaiming your pallium? I would have it dry cleaned first; you never know where it’s been. You could clear up a lot of this mess of the past 6.5 years, and it might even reassure some people that the Church really is who She says She is, that Christ keeps his promises, pillar of fire pillar of truth, and all that good stuff. If not, and if CCC675 really is in play, could you at least do me a solid and have +Ganswein email me the Third Secret?